We teach Science in Nursery and Reception classes as an integral part of the topic work covered during the year. The Early Years Foundation Stage is planned in accordance with the “Understanding of the World” area of learning. The children are assessed  through observation and planned activities, which inform the children’s profiles for the end of Reception.

Science in Key Stage One

The principal focus of science teaching in key stage 1 is to enable pupils to experience and observe phenomena, looking more closely at the natural and humanly-constructed world around them. They are encouraged to be curious and ask questions about what they notice. They are helped to develop their understanding of scientific ideas by using different types of scientific enquiry to answer their own questions, including observing changes over a period of time, noticing patterns, grouping and classifying things, carrying out simple comparative tests, and finding things out using secondary sources of information. They begin to use simple scientific language to talk about what they have found out and communicate their ideas to a range of audiences in a variety of ways. Most of the learning about science should is done through the use of first-hand practical experiences, but there should is some use of appropriate secondary sources, such as books, photographs and videos.

In Year 1 pupils learn about the following topics:

PLANTS: identifying and naming some common wild and garden plants and trees, and identifying deciduous and evergreen trees

In Year 2 pupils learn about the following topics:

PLANTS: describing how seeds and bulbs grow into mature plants, based on observations; describing  how plants need water, light and a suitable temperature to grow and stay healthy.

LIVING THINGS AND HABITATS: observing and comparing some differences between things that are living, dead and things that have never been alive; describing how different habitats provide for the basic needs of different kinds of animals and plants; identifying and naming a variety of animals and plants in different habitats, including a micro-habitat; describing how animals obtain their food from plants and other animals, using the idea of a simple food chain, and identify and name different sources of food.

USE OF EVERYDAY MATERIALS: identifying  and comparing  the suitability of everyday materials (including wood, metal, plastic, glass, brick, rock, paper, cardboard) for particular uses; finding out how solid materials can be changed by squashing, bending, twisting, stretching.

The principal focus of science teaching in Lower Key Stage Two is to enable pupils to broaden their scientific view of the world around them. They do this through exploring, talking about, testing and developing ideas about everyday phenomena and the relationships between living things and familiar environments, and by beginning to develop their ideas about functions, relationships and interactions. They ask their own questions about what they observe and make some decisions about which types of scientific enquiry are likely to be the best ways of answering them, including observing changes over time, noticing patterns, grouping and classifying things, carrying out simple comparative and fair tests and finding things out using secondary sources of information. They draw simple conclusions and use some scientific language, first, to talk about and, later, to write about what they have found out.

In Year 3 pupils learn about the following topics:

PLANTS: identifying and describing the functions of roots, stem/trunk, leaves and flowers of flowering plants; knowing the requirements of plants for life and growth (air, light, water, nutrients from soil, room to grow); describing how water is transported in plants, based on investigation; knowing flowers are important for pollination, seed formation and seed dispersal.

ANIMALS, INCLUDING HUMANS: knowing humans and other animals need the right types and amount of nutrition; Describing the simple functions of the basic parts of the digestive system in humans; Identifying that humans and some other animals have skeletons and muscles for support, protection and movement; giving an example of animals that have an exoskeleton.

ROCKS: comparing and grouping together different kinds of rocks on the basis of their appearance and simple physical properties;  describing in simple terms how fossils are formed when things that have lived are trapped within rock; knowing soils are made from rocks and organic matter.

LIGHT: knowing light is needed to see things and that dark is the absence of light; Noticing that light is reflected from surfaces; recognising that light from The Sun can be dangerous and that there are ways to protect their eyes; recognising how shadows are formed;  finding patterns in the way that the size of shadows change.

FORCES AND MAGNETS: comparing how things move on different surfaces; noticing that some forces need contact between 2 objects, but magnetic forces can act at a distance; observing and  grouping materials which are/not attracted by a magnet; knowing magnets have 2 poles and knowing whether 2 magnets will attract or repel, depending on which poles are facing.

In Year 4 pupils learn about the following topics:

ANIMALS, INCLUDING HUMANS: describing the simple functions and names the basic parts of the human digestive system; identifying different types of teeth in humans and their simple functions; constructing and interpreting  a variety of food chains, identifying producers, predators and prey.

STATES OF MATTER: comparing and grouping materials together, according to whether they are solids, liquids or gases; observing that some materials change state when they are heated or cooled and researching  the temperature at which this happens; identifying the part played by evaporation and condensation in the water cycle; knowing temperature affects the rate of evaporation.

SOUND: recognising that something vibrates to cause a sound and that vibrations from sounds travel through a medium to the ear; finding patterns between pitch and features of the object which produced the sound; finding patterns between volume and the strength of vibration; recognising that sounds get fainter as the distance from the sound source increases.

ELECTRICITY: constructing  a simple circuit, identifying and naming basic components; recognising that a switch opens and closes a circuit; recognising some common conductors and insulators and knowing metals are good conductors.

The principal focus of science teaching in Upper Key Stage Two is to enable pupils to develop a deeper understanding of a wide range of scientific ideas. They do this through exploring and talking about their ideas; asking their own questions about scientific phenomena; and analysing functions, relationships and interactions more systematically. At Upper Key Stage Two, they encounter more abstract ideas and begin to recognise how these ideas help them to understand and predict how the world operates. They also begin to recognise that scientific ideas change and develop over time. They select the most appropriate ways to answer science questions using different types of scientific enquiry, including observing changes over different periods of time, noticing patterns, grouping and classifying things, carrying out comparative and fair tests and finding things out using a wide range of secondary sources of information. Pupils draw conclusions based on their data and observations, use evidence to justify their ideas, and use their scientific knowledge and understanding to explain their findings.

In Year 5 pupils learn about the following topics:

LIVING THINGS AND HABITATS: describing the differences in the life cycles of a mammal, amphibian, insect and bird; describing the life process of reproduction in some plants and animals.

PROPERTIES AND CHANGES OF MATERIALS: comparing and grouping everyday materials on the basis of these properties: hardness, solubility, transparency, conductivity and response to magnets; knowing some materials will dissolve and how they can be recovered; knowing the roles of filtering, sieving and evaporating in separating materials; explaining that some changes result in the formation of new materials and that this kind of change is not usually reversible.

FORCES: explaining that unsupported objects fall toward the Earth because of the force of gravity acting between the Earth and the falling object; identifying the effects of air resistance, water resistance and friction, that act between moving surfaces; recognising that some mechanisms allow a smaller force to have a greater effect.

In year 6 pupils learn about the following topics:

ANIMALS INCLUDING HUMANS Identifying and naming the main parts of the circulatory system, describing the functions of the heart, blood vessels and blood. Recognising the impact of diet, exercise, drugs and lifestyle on the way their body functions. Describing the ways nutrients and water are transported within animals, including humans.

EVOLUTION & INHERITANCE Recognising that living things have changed over time and that fossils provide information about living things on Earth millions of years ago. Knowing living things produce offspring of the same kind, but offspring vary and are not identical to their parents. Identifying how animals and plants are adapted to suit their environment in different ways and that adaptation may lead to evolution. 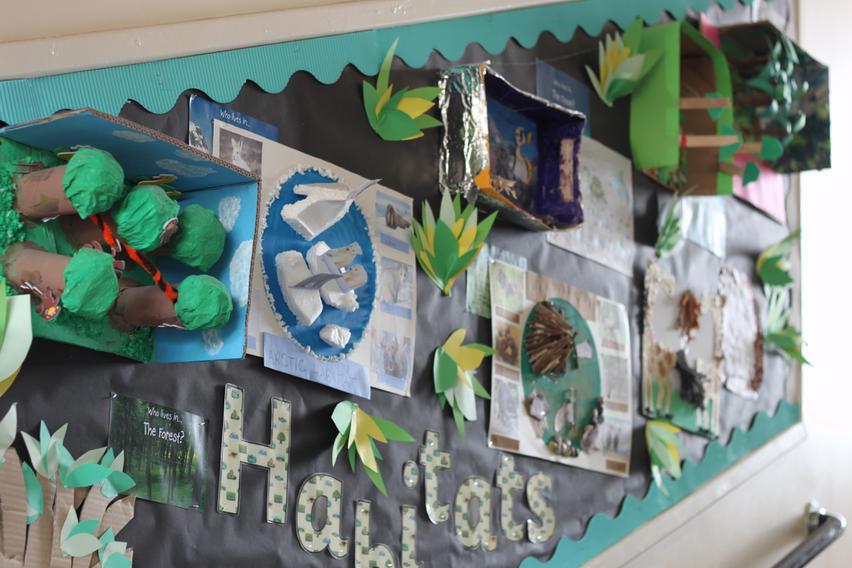 Yearly overview of Science throughout the school